After coming back from our amazing Everest Base Camp trip, Jackie and I had so many people say to us, “wow that must have been an expensive trip”. Well, the truth was, this was actually one of our most affordable trips we have done! Jackie and I love traveling, but what we love even more, is traveling in an affordable way. Being that we are not rich, by traveling this way, we are able to afford multiple trips a year. Our goal is to see the world and if we blew our entire budget on one trip, reaching our goal would be virtually impossible. Because we were able to do this trip so affordably, we thought it would be nice for us to share with you what and how we spent what we spent. Read on to learn how we afforded it and how you can too!

Since I’m a ‘numbers’ guy, I’m pretty meticulous about our budget and about recording expenses when we travel. We broke our budget into 5 main categories: Transportation, Accommodation, Food/Drinks/Snacks, Permits/Fees/Misc, and lastly, Guide/Porters. We will go through each category with you and break down all our costs. As a reference, roughly 113 Nepali Rupee (NPR) equals to about $1 USD.

—> SAIF TRAVELS ‘MONEY SAVING’ TIP: We recommend bringing a battery pack to charge your electronics because you will pay to charge your devices in the teahouses, with costs ranging from 150 NPR for a full charge at most lower elevations to 350 NPR for just an hour at higher ones. Another added cost that you might not think about is wifi. If you want wifi, it comes at a cost as well, so we decided to just stay off the grid (other than at the Namche Bakery where wifi was complimentary and we recommend going for the desserts too, they’re delicious). 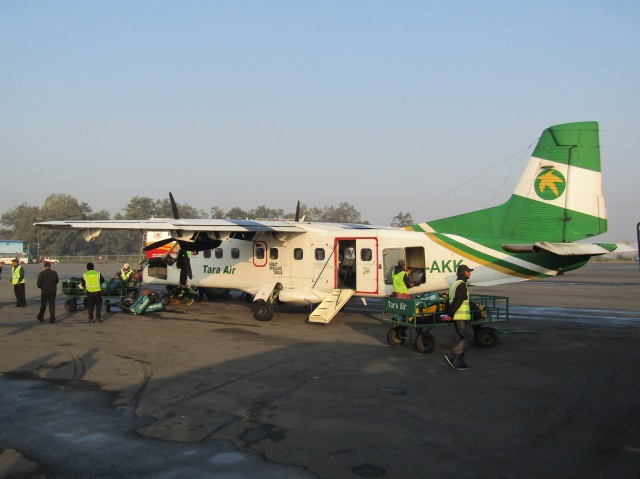 For our transportation budget we included only our roundtrip flights from Kathmandu to Lukla. The reason for this is that depending on where you are in the world, your flights to Nepal can vary greatly; also we did not include any transport costs in Kathmandu, as we did not consider them as actual Everest Base Camp trek expenses. The cost of the flights to Lukla from Kathmandu are pretty standard. This cost accounted for almost half our total cost! (Note: We had paid this on our credit cards months prior, when we actually booked, so this is not a cost we occurred ON the trek, but one we added to the budget nonetheless, as it is a trekking expense). 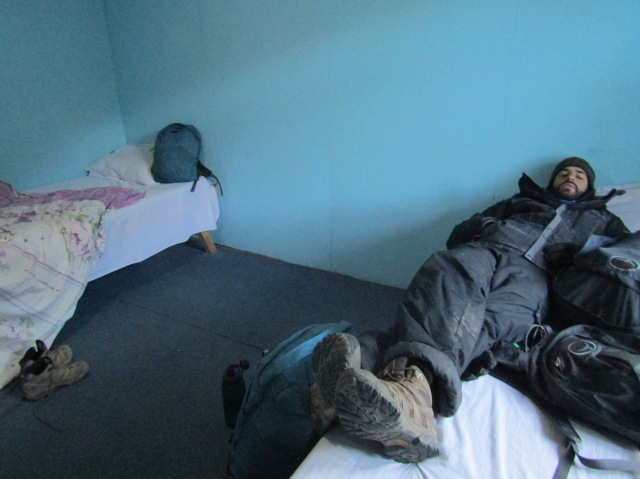 For our accommodation, we stayed in teahouses during the entirety of the trek. Jackie and I shared a room each day making the cost per person cheaper than what we would have paid if we were traveling solo, which really are so super cheap to begin with. For the first few nights we paid our teahouse fee directly to the teahouse, but after a certain point on the trail there were “checkpoints” where they would collect the fee prior to entering the town. The strange thing about this was that it was a fixed fee no matter which teahouse you ended up at and the teahouses were most definitely not equal. We did see some independent trekkers refuse to pay at the checkpoint, but since we were with our guide we didn’t put up a fight (and he said if you refuse to pay, the authorities somehow catch up with you later). It wasn’t that much more but it was more than we thought it should have been based on the quality of where we stayed. The checkpoint cost also went up for the last couple towns on the trek too. 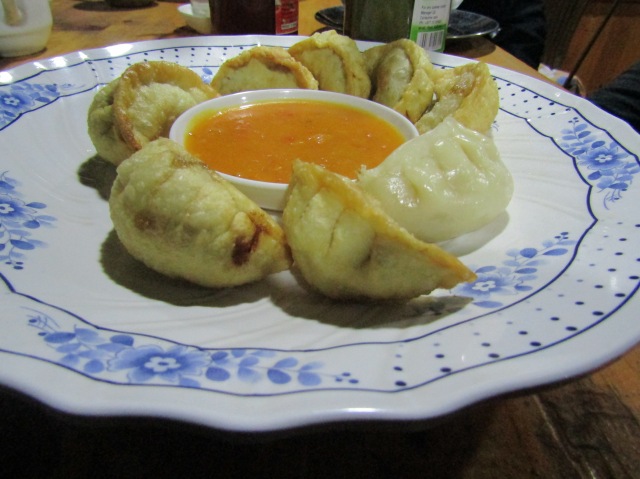 The food costs overall were very affordable. Jackie and I shared meals a lot which made it even cheaper – the perks of being a couple, I guess! Another thing we did that made the cost cheaper is use our steri-pen which treated our water, that we would get from the tap and from streams on the trail. If we hadn’t done this, the water costs would have been astronomical, as we would have been buying bottled water from every teahouse we stayed at. The drinks we purchased were mostly tea, and other hot drinks like hot tang! (Try it. It’s unbelievable!) As for snacks, I picked up a few snickers at the 7/11 in Namche Bazaar at 90 NPR a piece. The most expensive day was in Gorak Shep where they actually did not have any tap water available so we had to buy our water on this day at 400 NPR a liter. Also the cost for candy bars and chips in the teahouses were quite high so we stayed away from them for the most part, unless we were celebrating or really felt we needed it. We did get Pringles in Gorak Shep though and believe me, it was worth every rupee (700 to be exact!) 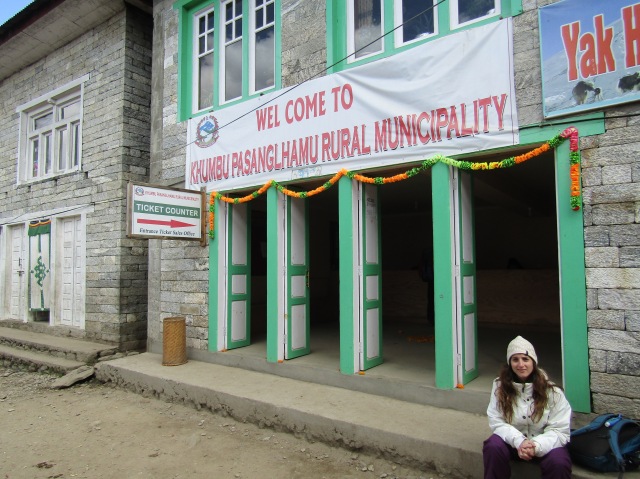 In order to trek to Everest Base Camp, you are required to purchase a National Park Entrance Permit and the Khumbu Pasang Lhamu Rural Municipality Entrance Fee. The permit can be obtained at the Tourist Center in Kathmandu and the Municipality Entrance Fee can be paid on the trail (more detail on this in our packing list blog). We also added the sleeping bag rental cost to this table because we had no where else to put it. The cost of this was 80 NPR per day. You can also rent/buy ‘down’ coats, trekking boots, pants, etc. in Thamel but we had most of our own gear already. 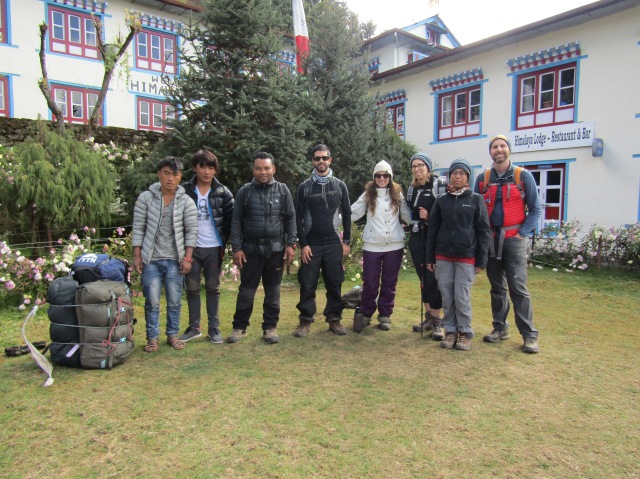 We decided to do the trek independently without a tour group. This was a money saver because some of the groups charge thousands of dollars per person. We did however a hire a guide and 2 porters, which we felt was a worthy investment. This cost can be totally cut from your budget if you do not need a guide or porter, but we highly recommend getting one. The trail to Everest Base Camp is pretty straight forward and well marked for the most part. There are some places where the trail does split off, but you can ask fellow trekkers for assistance if you are unsure or do research of the trail ahead of time to avoid getting lost. We did not want to have to deal with that as we figured the altitude and the long hiking days would be stressful enough as it is. Also if you want to carry your own pack you can do that as well. We thought it would be nice to contribute to the local economy by hiring guide/porters and take some of the load off our backs. We met our guide in Lukla at the Himalaya Lodge, where he gave his pitch and provided his own porters. He first quoted us in USD $25 per porter and $25 for the guide per day. We didn’t haggle too much since his prices were already pretty good. There were also five people in our group so the cost per person really wasn’t too bad. We also tipped each guide and porter and bought them dinner on our final night together. We spent 11 days with them and bonded and learned a lot. Our incredible porters carried upwards of about 60lbs each on their backs everyday! 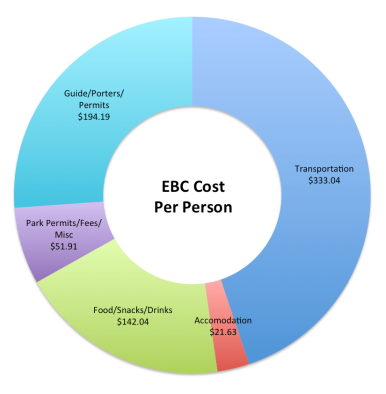 The grand total of our trip per person per day was about $67.53 USD. We hope that this budget blog helps convince anyone who was apprehensive about going on the trek due to fear of cost.