After Sam’s month-long work trip in Europe (read all about it here), I decided to meet up with my beloved in the beautiful city of Prague!

I had come in a day earlier than he was scheduled to arrive, so I had a whole day to myself to peruse the city. I had caught the red-eye from JFK and by the time I arrived in Prague, I was beat and needed a nap. Luckily the hotel was across the street from the airport (pretty convenient!) so I got a few hours of much needed shut-eye before catching the bus to the city center to see what Prague was all about.

The bus stop was really convenient as well and located at the airport and after spending a few Krona and about a half-hour’s worth of time, I finally arrived in the city center.

The first thing I did was look around for some food. I found a delicious looking dessert called ‘Trdelnik’, which is also known as a ‘Chimney Cake’. This delectable dessert features sweetened dough (similar to a churro), that is rolled out flat, chocolate is spread on it like butter and then the dough is heated and rolled on a spinning stick over a flame. Vanilla ice cream is placed inside the dough and chocolate is drizzled over it, which hardens, and then a grape is placed on the top. Screw lunch – I knew this was what I wanted for my first ‘taste’ of Prague!

After my satisfying ‘Trdelnik’, I walked around the city some more, taking in the ambience foot by foot. This is a beautiful city lined with alleyways and some of the most beautiful architecture I have ever seen. The river that runs through the heart of the city is called the Vltava. I snapped some shots of this beautiful river from the street above but down below there are boaters that will offer you a boat ride to see the river close up. I did not partake on this boat ride but the people that had, seemed to have had an amazing experience. Maybe we will do that next time… 🙂 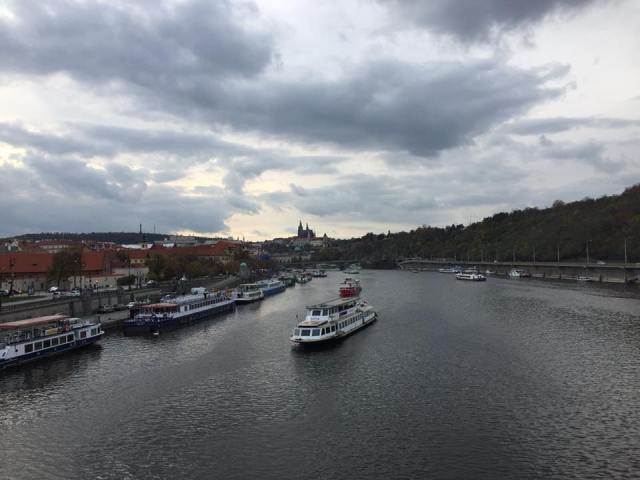 By this point it was late afternoon and since I had not napped much, I was ready to go back to the hotel and also I didn’t want to see too much of the city without Sam. I had dinner that night in the hotel and then got into bed and fell asleep to the only English station on TV and was eager to see Sam after not seeing him for a month! Morning could not come soon enough!

The next morning, Sam had arrived! I was so excited to see him. We napped a bit more and then got on the bus again to check out the sights. I showed Sam the Vltava where I had taken pics the day before and though not much of ‘sweets’ guy, I described to him the heavenly experience I had while eating the ‘Trdelnik’ (he passed on them. Quite a shame, in my opinion!).

We walked around the narrow alleyways looking for a few key things: Prague Castle (check!), The Astronomical Clock – Orloj (check!) & the Lennon Wall (check!), all which we later found – but our first stop of the day was a little food stall where the chefs were cooking up some delicious traditional ‘Czech’ cuisines. We tried both the ‘Halusky’ and the ‘Svarak’, which were amazing! ‘Halusky’ are a traditional variety of thick, soft noodles or dumplings and it also contained pieces of ham. The ‘Svarak’ was hot red wine, made fresh and served in a styrofoam cup. This was delicious and a great way to keep warm in the chilly fall Eastern European weather. I’m a huge lover of wine & this surely did not disappoint!

After our meal at the food stall, we ventured to conquer the list of things we wanted to see. Our first stop was the ‘Orloj’ (Astronomical Clock). This is an absolute must-see while in Prague! Every hour on the hour, the clock entertains crowds of people for 3 minutes. The clock is comprised of 3 parts – the ‘walk of the apostles’ (top), the sphere or clock dial (middle) and the calendar (bottom). When the clock hits the top the hour, a skeleton pulls the bell cord. Then the apostles appear out the top of the clock. On the left window St. Paul is first, followed by St. Thomas, then St. Juda Tadeus, St. Simon, St. Batholomew and lastly St. Barnabas. On the right window St. Peter is first, followed by St. Mathew, then St. John, St. Andrew, St. Philip and lastly St. Joseph. After the apostles do their walk, they go back inside. When the window closes, a cockerel flaps and crows in an alcove then the chimes of the hour can be heard (the number of chimes heard depends on what time it is. At 12 O’clock, for example, 12 chimes will be heard). Simultaneously while all this is happening on the top of the clock, the middle and bottom sections are doing their own thing. The details as well as the colors on this clock are beautiful in and of itself, but the show at the top of the hour is truly incredible to see. You have 24 chances to see this each day, so I suggest you do not miss this incredible event!

After our time at the clock, we headed toward the Lennon wall. Truth be told, I had higher expectations for this wall than what we actually experienced. It was still cool to see but would I make a point of ‘dropping everything’ and seeing this if you already have other things planned? No. What we liked: the colors and the positive messages. What we did not like: many of the images and quotes pertaining to Lennon had been covered up by graffiti; it’s a bit hard to get to; and there a lot of crowds. Overall, I am glad we saw this but I am not sure that I would go back and see it again.

After the Lennon wall, we headed to Prague Castle, our final stop of the day. To go inside the castle you have to wait on a line and pay, so we did not go inside. Instead we just took pictures of the outside and the view, which are both incredible. Doing what we did was awesome and we did not feel like we missed out, but if you’ve got the Krona and the time, I suggest going inside. If you do, let us know how it is!

After our busy day in the city, we were excited to head back to the hotel and change to get ready for the opera. We saw ‘Madama Butterfly’ at the Navodni Divadlo and while in Italian, though we did not understand a single word, this was an incredible show! There were actually screens toward the top that had it written out in both English & Czech subtitles, I think it was actually a bit more fun to leave it to your own interpretation about what was happening. The wine here is affordable and plentiful and you are allowed to bring it inside the theatre. Additionally, people dress up to go to the opera so it’s a fun experience and we felt like we living the high life that night 🙂

That night we slept like babies and were excited to see what our next day in Prague would bring!

The next day in the morning, we got up and had breakfast and then went into the city to check out the Charles Bridge. This bridge is the main bridge in Prague that crosses the Vltava and the bridge is lined with statues and gargoyles, as well as musicians and people selling things. It’s a picturesque spot, though it’s hard to get a picture without a ton of people in it. Upon crossing this bridge, it led us to another area of the city that had a lot of bars, restaurants and souvenir shops. We spent a few hours here visiting cafes and shopping. 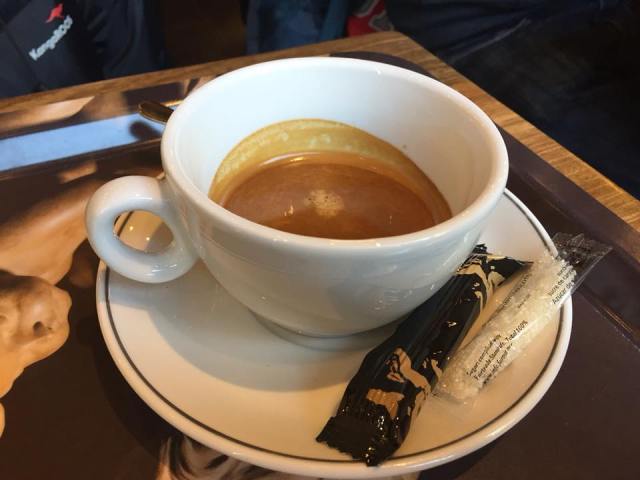 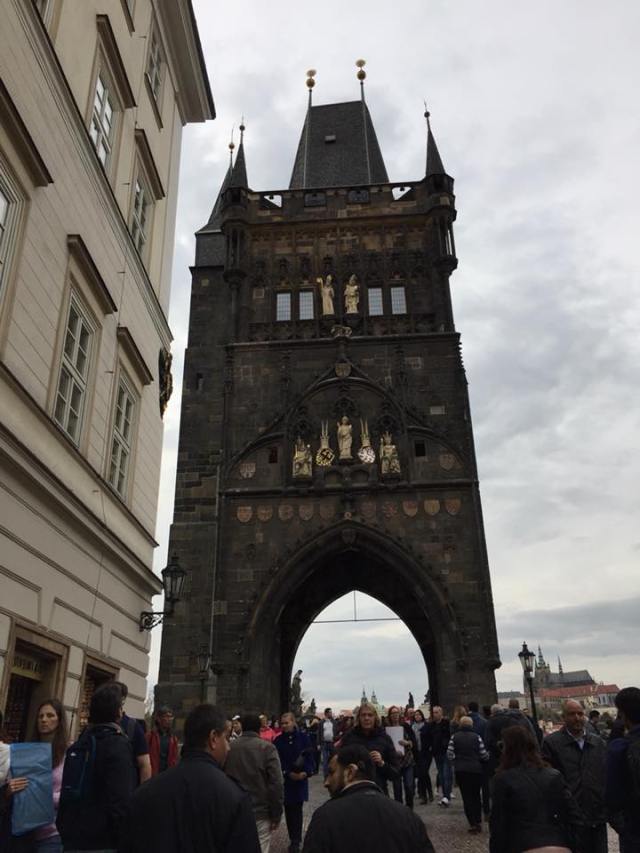 Later in the day we visited an absintherie where we tried 4 very potent but amazing absinthe drinks. This absintherie is home to over 100 different kinds of absinthe. Pretty intense if you ask me!… but overall an enjoyable experience. It’s hard to find absinthe here in the States so I feel like this is something to partake in if it’s available… just don’t forget your drinking shoes! 😉

That night for dinner we had the highly-recommend & amazing Pork Knuckle (a Prague staple) and Sam had this dark beer which he loved.

Our last day in Prague had us wandering the city, doing some more shopping and trying the remaining foods on our list that we hadn’t tried – one being chocolate (Europe is known for having some of the world’s best chocolates) and thinly-sliced potatoes on a skewer. They were hot, gooey and delicious and probably, in my opinion, one of the best thing we ate while in Prague.

That night we had spontaneously booked tickets to a soccer ‘football’ game at Generali Arena / Letna Stadium. The game was Sparta Praha vs FC Banik Ostrava. Despite cold temperatures and nosebleed seats, Sparta Praha won and we had an amazing time! The stadium sells wine, beer and amazing hotdogs. The energy here was intense and the fans were part of what the made the experience so fun. A bunch of Banik Ostrava fans came complete with a full band and had a drum going the entire time. I guess some people are into it a lot more than others. Soccer isn’t as popular here in the States as it is in Europe so we always try to see soccer games wherever we can – and they never disappoint! 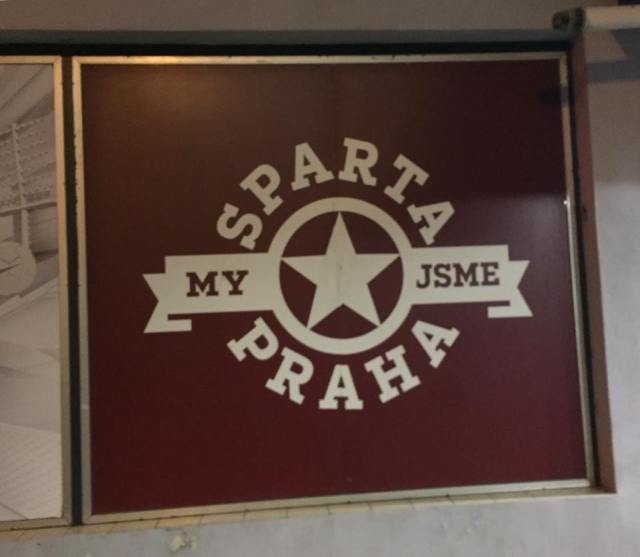 Though we had an amazing 4 days in Prague, I feel like it was so beautiful and there was so much to do that we could have stayed forever. Prague is one of my favorite cities in Europe so I hope we are lucky enough to get the opportunity to go back.

Until then, keep traveling, my people!